Oxfordshire at top of recycling table for seventh year 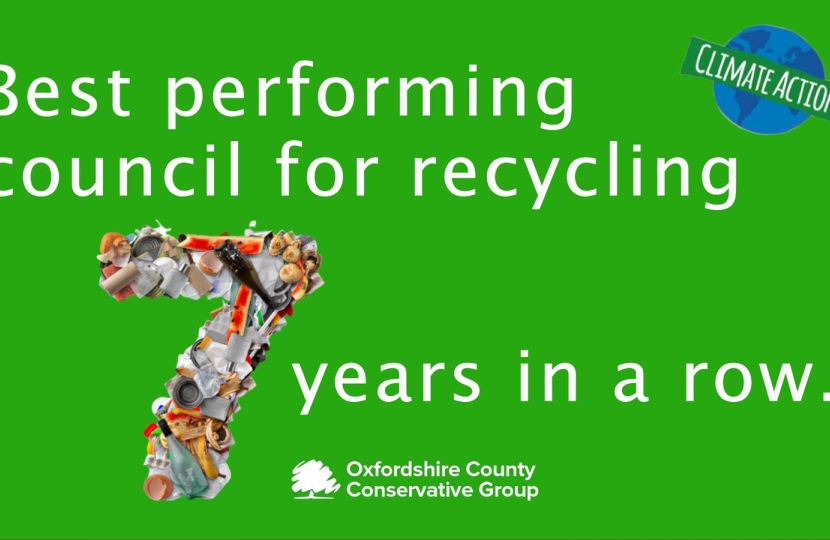 Read the story on the Oxfordshire County Council website here or below:

Residents in Oxfordshire have helped the county top the table nationally when it comes to recycling and composting for the seventh year in a row.

Oxfordshire County Council has once again been named the best performing county council waste disposal authority in England, according to new government figures released on 3 March 2021. Last year, residents recycled or composted 1.6 per cent more of their household waste than in the previous year. Nationally, the average for recycling in England rose by 0.9 per cent.

Overall, 58.8 per cent of household waste was recycled and composted in Oxfordshire last year, compared to 57.2 per cent the previous year. The national average was only 45.5 per cent according to the latest figures from the Department for Environment, Food and Rural Affairs (Defra).

Councillor Yvonne Constance, Oxfordshire County Council Cabinet member for Environment, said: “I would like to thank our residents who have done another great job of recycling so that the county keeps the top spot in the country. Oxfordshire councils provide really good waste collection and recycling services, but it is only because most people use them properly that we’re able to perform so well.”

Oxfordshire’s five district and city authorities have also achieved excellent results above the national average. South Oxfordshire and Vale of White Horse came second and fourth nationally, with recycling rates of 64 per cent and 63.3 per cent respectively.

Nearly 21,000 tonnes of food waste was recycled in 2019/20. Cherwell, West Oxfordshire, Vale of White Horse, and South Oxfordshire district councils, and Oxford City Council, operate the kerbside collections of household recycling and waste, which Oxfordshire County Council then disposes of.

Vicky Beechey, Oxfordshire County Council's Resources and Waste Partnership Manager, said: “Residents have done a great job to continue to recycle through this challenging year, and we would like to thank the collection crews and staff at the recycling centres for their amazing efforts in managing so much more waste every week.

“For those looking to reduce their waste further, the Community Action Group network and Replenish project have lots of opportunities to get involved with local projects, and tips on how to reduce waste. Oxfordshire County Council also has the Waste Wizard, an online tool that can suggest places items can be repaired or donated, or which bin it needs to go in.”

Waste officers have said there is still a lot more to be done to improve recycling rates and the county council is keen to see further improvements as part of its goal to becoming carbon neutral by 2030. The Oxfordshire Resources and Waste Partnership of the district, city and county councils has a target to increase recycling to 70 per cent by 2030.

Cllr Constance added: “We’re not complacent. This year, more waste collected for recycling has been rejected than ever before due to the wrong waste being put into the wrong kerbside containers, such as textiles, nappies, and food being put in the mixed recycling bin.

“A huge amount of food waste is still being placed in the general waste bins – indeed, we know that around half the items placed in general waste could have been recycled using the services provided locally. So please check your local council website, make sure you’re recycling everything you can, and look for advice on how to reduce the amount of waste your household produces.”

COVID-19 has impacted how we all live and work, and indications are that with more of us spending more time at home, waste levels may be around five per cent (16,000 tonnes) higher this year. As well as the environmental impact of so much more waste, this has serious financial impacts for councils. Reducing the amount of waste we produce and recycling as much as we can is vitally important to protect our environment and free up funds to be spent on other council services.

**Please note this press release is from Oxfordshire County Council and is replicated here. **

For more information about this release contact the Oxfordshire County Council and Cherwell District Council communications team on  press.office@oxfordshire.gov.uk