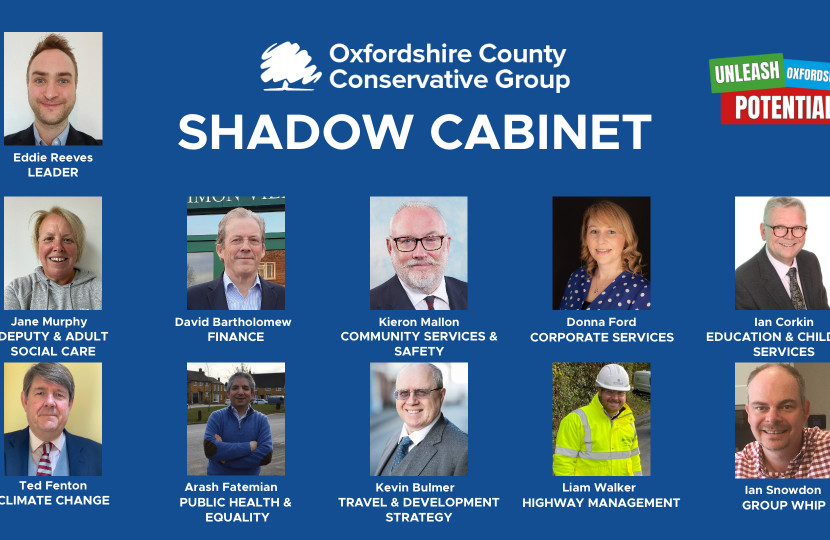 Oxfordshire County Council's Conservative Group have announced their Shadow Cabinet team to provide principled opposition to the incoming Lib Dem-led administration in County Hall, which will be supported by Labour and the Greens.

The team will be led by 36-year old, Eddie Reeves (Banbury Calthorpe), who was first elected to County Hall in 2017. He is joined by three Cabinet members from the outgoing Conservative-led administration (2017-21) - Liam Walker (Hanborough & Minster Lovell), Ian Corkin (Ploughley) and David Bartholomew (Sonning) - and two former Cabinet members from the previous term (2013-17) - Kieron Mallon (Bloxham & Easington) and Arash Fatemian (Deddington) - in an experienced line up.

"I am delighted with the new frontbench team. We have the right mix of experience and fresh faces to take on the County Hall's so-called 'Fair Deal Alliance' composed of the three Left-leaning parties.

With overwhelmingly the largest number of votes in Oxfordshire - 11% higher than our nearest rivals - council taxpayers will expect local Conservatives to really hold this Lib Dem-led administration to account for as long as their coalition with the other parties lasts.

With support from Labour and the Greens, the Lib Dems now command two-thirds of the Council's votes. With such a huge majority, they have complete control of a revenue budget of nearly half a billion Pounds and an infrastructure programme over a billion Pounds.

Local Lib Dems cannot continue to complain from the sidelines as they have done in recent years, nor can they blame the Conservatives nationally for all the county's troubles. They must now step up and deliver what they promised to the people of Oxfordshire and do so in a way that delivers a 'fair deal' to hard-pressed Council Tax-payers.

If the Left-leaning parties fall out with each other, local Conservatives will be ready to step up and provide financially sound leadership at the Council Council until voters in Oxfordshire can return us with a majority at the next countywide elections in 2025."

Your decision to plough ahead with creating an SODC calendar for “socially important topics and campaigns” comes as no surprise after two years of your grandstanding at council meetings.